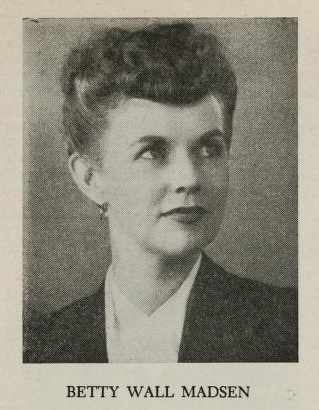 Lizabeth "Betty" Wall Madsen was born January 30, 1914 in Mt. Pleasant, Utah and was the daughter of Edward W. and Anna Crane Wall. She graduated from Wasatch Academy, Mt. Pleasant in 1931 and from Snow College, Ephraim, Utah, in 1934. In both schools she was active in drama, business and literary groups. She was married to E. Wallace Madsen of Manti, Utah on April 6, 1935. He preceded her in death in 1949. She was a secretary for American Smelting and Refining Company for 34 years, retiring in June 1978. She was active in many writing circles in Salt Lake, including the Art Barn Poets Claire Stewart Boyer Poetry Group, League of Utah Writers, and the Utah State Poetry Society. She was chosen Poet of the Year in 1968, and her book "The Amaranth" was chosen for publication widely. She was a member of Wasatch Presbyterian Church, Salt Lake City.
Betty Wall Madsen; Lizabeth Wall Madsen
Was published in an LDS work.
Ernest Wallace Madsen
1914-01-30
Mt. Pleasant, Utah
2005-03-16
Snow College
Female
Author, Poet
English