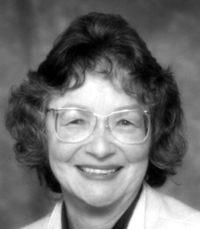 Bonnie S. Gudmundson was born February 18, 1930, in Salt Lake City, Utah, a daughter of William Theophil Stucki (Bill) and Lucy Marie Sorensen Stucki. She met Ariel George Gudmundson at the University of Utah in 1947 where they were students. They were married August 31, 1950, in the Salt Lake LDS temple. She earned a B.S. degree, with honors, in Education from the University of Utah in 1951. After her children were older she earned an M.A. degree in Speech Pathology (1974). She practiced her profession for 22 years in Davis School District, including several years as a teacher. For several years she had a private speech/language pathology practice. Bonnie was an active member of the Utah State Poetry Society and the League of Utah Writers, previously serving as president of both local chapters as well as secretary in the state organization.
Bonnie Virginia Stucki Gudmundson
LDS
LDS (member of the Church of Jesus Christ of Latter Day Saints)
Ariel George Gudmundson
1930-02-18
Salt Lake City, Utah
2007-04-17
University of Utah
Female
Author, Poet
English