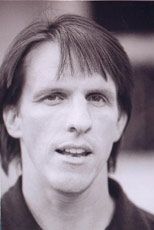 Brady Udall is an American writer. In 2010, he was appointed Writer-in-Residence of Idaho, a position he held until 2013.
LDS
LDS (Church of Jesus Christ of Latter-day Saints)
Brady grew up in a large Mormon family in St. Johns, Arizona. A collection of his short stories titled Letting Loose the Hounds was published in 1998 and his debut novel The Miracle Life of Edgar Mint was first published in 2001. The characterization and structure of the latter has been favorably compared to the work of John Irving. Thematically it has been compared to Charles Dickens. Michael Stipe has optioned a film adaptation of Miracle, with United Artists hiring Michael Cuesta to direct. Brady appeared on an episode of This American Life. Brady is a member of the Udall family, and his great-uncles include former U.S. congressman and Interior Secretary Stewart Udall and former congressman Morris Udall.
1971
St. Johns, Arizona
He graduated from Brigham Young University and later attended the Iowa Writers' Workshop
faculty member of Franklin & Marshall College, Southern Illinois University, teaches writing at Boise State University
Male
Author, Interviewee
English