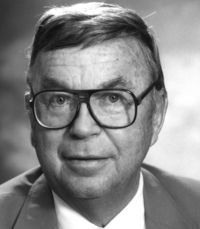 Dr. Brown was the son of David Alma and Ethel Myrl Peterson Brown in Greenwich Utah, delivered by his father.
Calvin Reed, C.R. Brown, Calvin Reed Brown M.D.
LDS
LDS (Church of Jesus Christ of Latter-day Saints)
He served in the army in WWII and then the Coast Guard and was sent to the Korean War on a cutter in the North Sea Area, then sent to the Navy for special training and assigned to a Marine Hospital. He finally retired as a Colonel in the Air Force at Hill AFB after 43 years in the service counting National Guard and Reserve Time. He was a member of the Tabernacle Choir from age 17 to 60
1926-07-11
Greenwich, Utah
2007-02-23
He served nine missions for the LDS Church, four of them accompanied by his wife and sweetheart Barbara
Snow College, University of Utah Medical School, Medical School at the University of Utah College of Medicine (1951), University of Utah and earned the masters degree in Health Science Dr. Brown had nine advanced degrees including a BA, AA, MA, MD, GCPA, LLB, JD, and three PhDs.
General surgery residency at the USPHS Hospital in Staten Island New York, Cancer Surgery residency at the City of Hope Hospital, general surgery residency at the Salt Lake General Hospital, Surgeon, taught surgical Anatomy at the University of Utah medical school, Chief of Surgery and Chief of Staff at the Lark Ellen Hospital
president of the Chamber of Commerce and Mayor of Charter Oak California, President of the Home Owners Association and on the Mount Olympus Community Council, membership in the Salt Lake County Medical Society, the Utah Medical Association and the American Medical Association, member and president of the Salt Lake Chapter of the Sons of the American Revolution and Secretary and Chaplain of the Utah State Society of the SAR, Surgeon General of the National Society as well as being on the Veterans Committee, Flag Committee, and Music Committee of the National Society, member of the Veterans Association for Service Men's Activities abroad and served as Surgeon General with that International Organization, belonged to the VFW, DAV, American Legion and the Kearns Lions Club
Male
Author
English