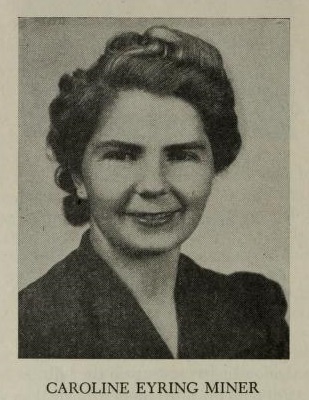 Caroline Eyring Miner was born Saturday, December 14, 1907 to Edward Christian and Caroline Cottam Romney Eyring in Colonia Juarez, Mexico. In 1912, Pancho Villa's rebels drove the Mormon colonists out of Mexico, so Caroline grew up in Pima, Arizona. She married Glen Bryant Miner on May 20, 1931 in the Mesa, Arizona LDS Temple. He passed away on June 8, 1996. Caroline and Glen were longtime residents of the Foothill neighborhood of Salt Lake City, residing at 2415 East St. Mary's Drive (1450 South) from 1953 until his death.

Caroline was a teacher of English and creative writing at Highland High School for 32 years. She was honored in 1969 as Delta Kappa Gamma Teacher of the Year. For 20 years she served on the Young Women's General Board of the LDS Church.