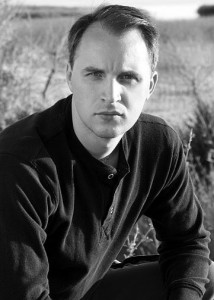 Dan Wells writes in a variety of genres, from dark humor to science fiction to supernatural thriller. He has been nominated for both the Hugo and the Campbell Award, and has won two Parsec Awards for his podcast Writing Excuses.
LDS
LDS (Church of Jesus Christ of Latter-day Saints)
1977-03-04

"I was born in 1977, on March 4th—the only day of the year that’s also a sentence, so I may have been predestined to be a writer. (Okay, I admit, any day in March is technically a sentence, but March 4th is the only non-numeric sentence. So there.) My parents were avid readers and SF/Fantasy fans, and they began my education early: I saw Star Wars in the theater when I was four months old, my dad read me The Hobbit when I was six, and I’ve been hooked on everything like it ever since. In second grade I announced to my parents that I was going to be a writer, and promptly wrote a Choose Your Own Adventure book about a maze that was literally impossible to escape—no matter which options you chose, you just kept going around in circles. I’d like to think I’ve come a long way since then.

I grew up in the US, in the state of Utah, and spent my childhood reading, writing, and learning everything I could. I thought for a time I was going to be a poet, and I still have a strong love of poetry. I’d like to think that, some day in the far-flung future, I’ll retire and teach British poetry in a college somewhere; I’ll find a way to combine John Keats, Emily Bronte, and A.A. Milne into a cohesive curriculum. I imagine that I will do so while wearing a tweed suit, ideally with elbow patches. My assistants will be a pair of hunting dogs named Cecil and Percy."