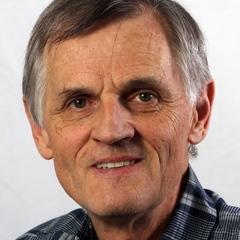 David Bly is a product of the prairies. Born and raised in the small town of Magrath, Alberta, neat the U.S. border, he has lived and worked most of his life in Southern Alberta. He has worked for weekly and daily newspapers in Canada and the U.S. as a writer, editor and photographer, and has taught journalism and photography at Lethbridge Community College.

As the father of six childre, he found storytelling an important asset. His wife, Janet, persuaded him to put in writing some of the stories he told, which triggered his interest in writing juvenile fiction.

Never sure whether he was a writer or a photographer, David developed a feature which combined both. Called "In The Mind's Eye," it is a photograph accompanied by a brief text. It has appeared in about 20 newspapers in Canada and the U.S.