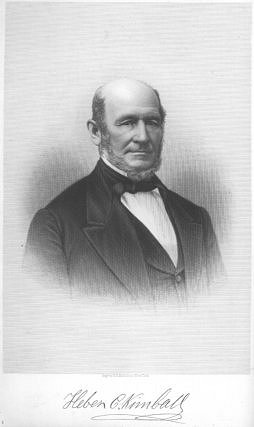 Heber Chase Kimball was First Counselor in the First Presidency of the Church from December 5, 1847, until his death in 1868. One of the foremost men in the early years of the Church, along with the Prophet Joseph Smith and Brigham Young, Heber marched in Zion's Camp in 1834, was ordained one of the original members of the Quorum of the Twelve Apostles in 1835, and experienced the spiritual manifestations that attended the dedication of the Kirtland Temple in 1836. He served two missions to Great Britain, in 1837-1838 and 1839-1841 (see Missions of the Twelve to the British Isles). Blunt, honest, loyal, and believing, Heber served the struggling Church well when steadfastness was among the most needed qualities.
Heber Chase Kimball, President H. C. Kimball, President Heber C. Kimball, H. C. Kimball
LDS
LDS (Church of Jesus Christ of Latter-day Saints)
1801-06-14
Sheldon, Vermont
1868-06-22
Great Britain 1837-1838 and 1839-1841
Male
Author
English