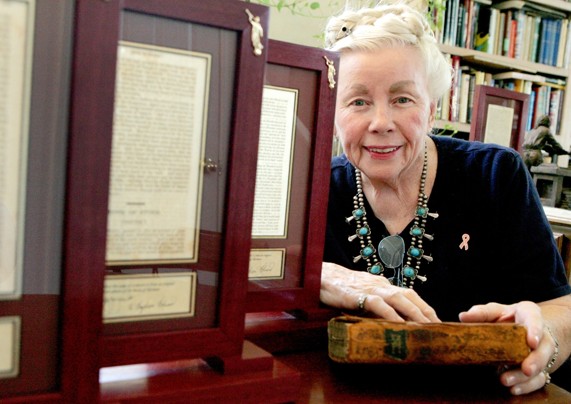 Helen Spencer Schlie was born August 24, 1923 in Deford, Michigan to Elvin Spencer and Blanche Danforth. In 1940 she married Alvin Wagner. Soon after their daughter Alnita's birth they divorced. During World War II Helen worked for a drill and tool company in Detroit, and later for General Motors inspecting Army trucks. Helen owned several businesses after the war, including a clothing store, a bakery, and a millinery shop. Helen also wrote and published poetry throughout her life.

Helen married Walt Schlie, a World War I veteran, in 1955. In 1961 Helen joined The Church of Jesus Christ of Latter-day Saints while living in Michigan. Walt was baptized five years later. Walt and Helen moved to Mesa, Arizona, where they opened a bookstore near the LDS Mesa Arizona Temple in 1965. They ran the store until 1990. They were well-known for having a first-edition copy of the Book of Mormon, which they allowed visitors to the bookstore to view. They later sold individual pages of the book. After Walt's death, Helen reopened her bookstore in 2011, and it remained open until 2014.