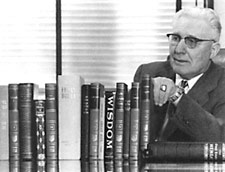 Brown, Elder Hugh B.; Brown, President Hugh B.
Homer Manly Brown and Lydia Jane Brown Brown
Zina Young Card
October 24, 1883
Granger, Utah
December 2, 1975
British Mission from 1904 to 1906 Returned in Mission field in 1937 served again as Mission President until 1940 Then, once more from 1944 to 1946 as Mission President
After returning to Canada, Brown was employed as a cowboy, farmer, and businessman. He renewed an interest in the study of law, which he began at the Law Society of Alberta prior to his military service. Brown completed a five-year apprenticeship while working a farm he had purchased. After passing the bar examination at the University of Alberta, he was admitted to the bar in 1921.
Author

6 Works by Hugh B. Brown