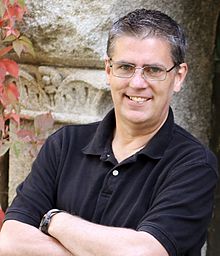 J. Scott Savage is the author of the Farworld series, the Case File 13 series, and the Mysteries of Cove series. He grew up in Northern California and now lives in Utah with his wife and four children. Scott has held too many jobs to count, including: a mall Santa, French chef, CEO of a dot com, plumber, radio station talk show host, and the guy who sits in the little photo developing booth. He has completed one marathon and hopes to complete another when the memories finally fade away. He loves reading, writing, camping, playing games with his family, and especially hearing from and meeting his readers
J. Scott Savage, Jeffrey Scott Savage
LDS
LDS (Church of Jesus Christ of Latter-day Saints)
1963-01-31
Oakland, California
CEO of an internet company, plumber, French chef, mall Santa and radio talk show host
Male
Author
English