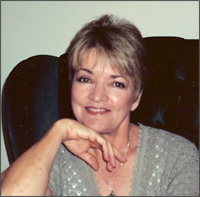 LDS
LDS (Church of Jesus Christ of Latter-day Saints)
Brent
4 Sons, 15 Grandchildren
Price, Utah
She worked for Hercules Powder Company and the Salt Lake City Police Department until her husband graduated from college. After the youngest son started school, she went back to work part-time, as the Orangeville City Treasurer, a postition she filled for eighteen years. She helped organize the Emery County Community Theatre and served as its chairman for 15 years. During that time she directed several musicals and had the lead in several others. She wrote two Children's Musicals for an elementary school, even sharing the role of songwriter for them. She's written several other plays and has written several children's books and ghostwritten two other books for another author. Since her retirement, JoAnn continues to sing in the Southern Utah Heritage Choir, and enjoys numerous hobbies.
"I love to paint. My favorite paintings are those that I do of my grandchildren. I have sold several of my paintings. I also enjoy pastel, colored pencil, and acrylic. I sew, quilt, crochet, knit, bottle, and bake. Canning and baking I do because I was taught the importance of it. The rest I do for fun. I love to restore old furniture and have some beautiful antiques. I collect dolls, miniature tea sets, and bells too."
Female
Author
English