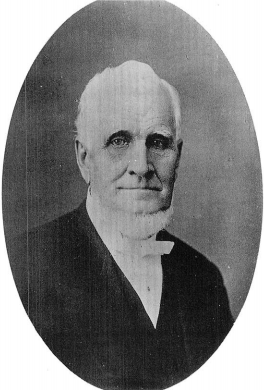 John Taylor was the third president of the Church of Jesus Christ of Latter-day Saints. He emigrated to the United States in 1828 or 1829. A fervent Methodist, Taylor heard of Mormonism from Parley P. Pratt and he and a number of his friends were baptized in 1836. Ordained an apostle in 1838, he fulfilled a mission in England then returned to edit the Times and Seasons and the Nauvoo Neighbor. A staunch defender of Joseph Smith, Taylor was with the Smiths at the time of their deaths in Carthage Jail. It was Taylor who sang "A Poor Wayfaring Man of Grief" at the request of Hyrum Smith, moments before the mob arrived. After fulfilling missions in England, France, Germany, and other European countries, Taylor became active in the territorial legislature. He presided over the Church in the eastern states, where he published The Mormon, a newspaper advocating the Mormon cause against a hostile government. After the death of Brigham Young, this poet and hymnist became the third president of the Church, presiding from 1880 until his death in 1887, at which time he was a fugitive from government officials who desired to bring him to trial for his violation of the Edmunds-Tucker Act.
Taylor, Elder John; Taylor, President John
LDS
LDS (Church of Jesus Christ of Latter-day Saints)
1808-11-01
Milnthorpe, Westmoreland, England
1887-07-25
British Isles (1838-1841), President of the Eastern States Mission, President of the France Mission
Apprenticeship to a cooper and later received training as a woodturner and cabinetmaker
Associate editor of the Times and Seasons, Associate judge, Speaker of the House, Probate judge, Superintendent of schools
Male
Author, Translator
English