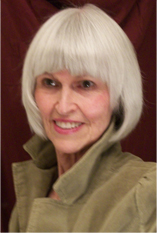 Marilyn McMeen Brown was no different from most ten year olds suddenly discovering the power of the written word. But as a child she wasn’t reading Harry Potter, but George Eliot’s Adam Bede, about a principled preacher with a heart of gold. Keeping her eyes on the printed page and chewing on a pencil, Marilyn made a decision to write about her unsung regional culture with Eliot’s power—if she could. She wrote all through her BA and MA from BYU, her creative writing MFA from the University of Utah, through her two-year marriage to a musician and the birth of her only child, and finally through the thirty-six years of her marriage to realtor/actor husband Bill Brown, raising his big motherless family. She wrote musicals during the nine years of the Browns’ Springville, Utah, Villa Playhouse; she wrote at the city pool while the six children went swimming, while she was driving them to music lessons, and in the middle of the night. Receiving awards, she kept going. She won the first Mayhew prize ever given at BYU, an honorable mention from the Utah State Fine Arts competition for House on the Sound, and two years later the state’s first prize of a thousand dollars for Road to Covered Bridge. She won first prizes for both poetry and short story in the only Utah Writer’s League contest she ever entered, a Randall Book award, the first Association for Mormon Letters award ever given for a novel—her Earthkeepers—and several Publisher’s House Awards for the half dozen novels she published at CFI. Because the awards inspired her, she established the Marilyn Brown Novel Award of a thousand dollars each year given by UVU to encourage other struggling serious literary writers. In 1996 Marilyn and her husband Bill established the Villa Playhouse Theatre in Springville, which ran for almost nine years until Bill's heart attack in 2004. This is when Marilyn wrote the two musicals. Because of Bill's health problems, they began living in St. George in the winters.
Marilyn McMeen Miller Brown, Marilyn McMeen Miller
LDS
LDS (Church of Jesus Christ of Latter-day Saints)
1938
Denver, Colorado
Brigham Young University, University of Utah
Professional writer, an editor for Brigham Young University Press, manager of her own publishing company, English teacher
Female
Author
English