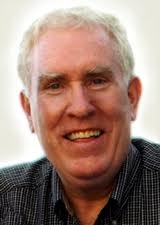 Mark Stoddard lived all over the USA, Germany, and England growing up as his father was in the Air Force. He graduated from Central High School in London, England in 1966. In 1972 he graduated from BYU with a BA in English with minors in political science, history and humanities. He interrupted his education and served as a missionary for two years (1968-70) in Australia. After graduation, Mark stayed on at BYU to do masters work in English and Theater Arts. He wrote a one-act comedy, “An English Toffee in American Molars” which was selected for production at the BYU Mormon Festival of Arts. He also wrote the musical drama "Strangers in Nauvoo."

He left the university to become a general contractor in California with his father and brothers. During this time he was asked by Michael Girlikhes, creator of Disney on Parade and the Polynesian Cultural Center production, to be his stage manager of the 10 stages of the Los Angeles Street Scene Festival. Mark went on to a career in business and marketing. He’s written 17 books on starting businesses, marketing and advertising. One book was translated into Russian and Mark was invited by the deputy minister of Higher Education to come to the USSR to teach Soviet government groups the fundamentals of the free market.