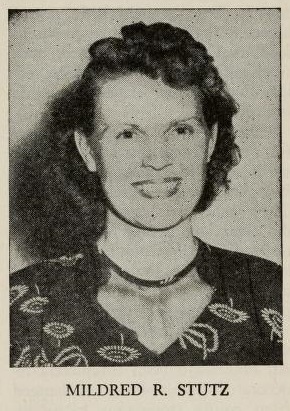 Mildred Robison Stutz was born November 15, 1920 in Sutherland, Utah, the fourth daughter of eleven children born to Ward Albert and Mary Josepha Abbott Robison. After graduating from Delta High School, Mildred attended Brigham Young University where she met her husband, Howard C. Stutz. They were married on July 15, 1940. The marriage was later solemnized in the Salt Lake Temple. She and Howard purchased a small farm in the riverbottoms of Provo, where they raised their family of seven children. She enjoyed planting flowers, bottling fruit, and making their little farmhouse into a beautiful home for her family.

One of Mildred's most notable talents was her ability to write. After attending college, she won several awards and had some of her works published. However, she found her greatest happiness in writing for her family, and she leaves behind a legacy of poetry, short stories, family and ward newsletters, and histories that will bless others for generations to come.