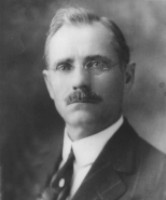 Nephi Anderson was the most prominent fiction writer of the "Home Literature" period of Mormon Literature. His Added Upon (1898) remains the best exemplar of this period, and has stayed in publication continually for a century. Although Added Upon endures as his most well-known work, most critics agree that it is not his best. During his career, Anderson wrote nine more novels, four books, forty articles and at least forty-eight short stories. He developed his style to overtly integrate the gospel message into his writing. His literary works have been studied critically most prominently by Richard Cracroft. (See his "Nephi, Seer of Modern Times: The Home Literature Novels of Nephi Anderson.")
N. Anderson
Christian and Petronelle Nielson Anderson
Asenath Tillotson (1886 - her death in 1904) Maud Rebecca Symons (1908)
In 1871, at six years of age, immigrated to Utah from Norway with his parents. He traveled widely to speak about genealogy, for which he was known as a major force in the church. He stated that the small genealogical library in Salt Lake City, Utah would become "the largest and best equipped ... in the world."
1865-01-22
Christiania, Norway
1923-01-06

Studied at the University of Utah
Anderson taught school in Ogden and Brigham City until becoming Superintendent of schools in Box Elder County, a position he held from 1900-03. He served as editor of the Millennial Star during his mission in Great Britain and taught English at LDS High School when he returned. He edited the Liahona (the voice of the church to the central United States) while in the Central States Mission, and the Utah Genealogical and Historical Magazine from 1910-23. Anderson served on the General Board of the Mutual Improvement Association from 1910-23, and while serving on the General Priesthood Committee of the Church prepared several courses of study for priesthood quorums.
"What a field there is [in Mormonism] for the pen of the novelist." "A good story is artistic preaching ... a novel which depicts high ideals and gives to us representations of men and women as they should and can be, exerts an influence for good that is not easily computed."
Male
Author
English