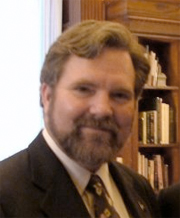 Patrick "Pat" Bagley (born 1956) is a liberal American editorial cartoonist and journalist for The Salt Lake Tribune in Salt Lake City, Utah, and an author and illustrator of several books. Bagley was born in Salt Lake City and raised in Oceanside, California, where his father was mayor and his mother was a school teacher. Always interested in politics, during high school Bagley participated in a PBS interview of Ronald Reagan. As a member of The Church of Jesus Christ of Latter-day Saints (LDS Church), he was a proselyting missionary in the Bolivia La Paz Mission from 1975–77. In 1978 he received his degree in political science, with a history minor, from Brigham Young University (BYU) in Provo, Utah. Bagley has two sons, Miles and Alec. Will Bagley, Pat's older brother, is an accomplished historian of the western United States and coauthored This is the Place!: A Crossroads of Utah's Past with Pat in 1996. In October 2009, while reacting to recent statements by Dallin H. Oaks, an LDS Apostle, about gay marriage protesters and religious freedom, Bagley commented that he was "retired" from the church, though not bitter or angry, and considers his LDS life a "good experience" and "in my blood."
Patrick Francis Bagley, Patrick Bagley
Formerly LDS
Miles and Alec
For the 2002 Salt Lake Olympics, Bagley designed many popular commemorative pins that poked fun at local themes, including a "Seven Brides for One Brother" pin and a "Crickets Make Me Barf" seagull pin. During the Olympics, Bagley sold out of his Utah-themed pins and many in high demand were sold at inflated prices. After the events had ended, Bagley continued to produce pins as the only recognized "pin artist" in the world.
1956
Salt Lake City
Bolivia La Paz Mission
Degree in political science, with a history minor, from Brigham Young University
In 1977, during a finance class at BYU, Bagley doodled a political cartoon, which he submitted to the student newspaper, The Daily Universe. This became his first published cartoon, which was reprinted in Time Magazine just weeks later. Bagley submitted more cartoons to the Universe and targeted campus issues, such as BYU's requirement for female students to wear dresses. Some believe the attention from his cartoons helped change the policy. After graduation, Bagley briefly worked as a caricaturist in the nearby Orem Mall, before being hired as the editorial cartoonist at The Salt Lake Tribune, where he still produces a daily cartoon. His cartoons have appeared in The Washington Post, The Guardian of London, The Wall Street Journal, Newsweek, and The Los Angeles Times. Over the years, he has produced more than 6,000 cartoons for the Tribune. He is syndicated in over 450 American newspapers and his work is regularly featured at Daryl Cagle's Political Cartoonists Index (Cagle.com) and in The Best Editorial Cartoons of the Year. Cagle ranks Bagley as the second most popular political cartoonist on his index. Bagley is also an illustrator and author of independent political cartoons and children's books. His liberal political stance contrasts with the conservative state of Utah, and has influenced several books of political cartoons and humor, including '101 Ways to Survive Four More Years of George W. Bush', 'Clueless George Goes To War!', 'Clueless George Is Watching You!', and 'Clueless George Takes on Liberals!'. Bagley describes himself as a moderate-Republican who became a liberal independent during the presidency of George W. Bush. Bagley often addresses the predominant Utah culture of conservative politics and the LDS Church. Bagley's joking about Jell-O consumption in Utah helped motivate the Utah State Senate to declare in an official 2001 Legislative Resolution that Jell-O is "a favorite snack food of Utah."
Brigham Young University
Male
Artist, Author, Illustrator