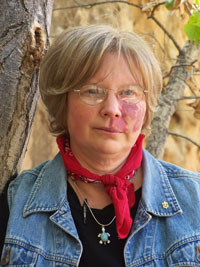 P. G. Karamesines lives and writes in Payson, Utah. She has won several literary awards from Brigham Young University, the University of Arizona, the Utah Arts Council, and the Utah Wilderness Association. Her M.A. is from BYU (creative writing), and she has pursued post-graduate studies in folklore and linguistics at the University of Arizona. She has published in literary journals and popular magazines locally and nationally.
Patricia E. Gunter, Patricia Gunter, P. G. Karamesines, Patricia Karamesines
LDS
LDS (Church of Jesus Christ of Latter-day Saints)
Patricia has been described as a poet, a novelist, a folklorist, an editor, and a literary critic. Certainly at times she behaves as if she were any and all of these and a few other things besides. Patricia grew up in the rural Virginia countryside, where she imprinted deeply upon the local flora and fauna. When she left the East to attend Brigham Young University in Utah she brought her impressionability with her, transferring it, perhaps irrevocably, to the desert Southwest. A literary nature journalist by nature, she does tend to write about the natural world … a lot. Whenever she can, she travels to the desert, the nearest place where the infinite becomes the obvious, and wanders from shimmering horizon to shimmering horizon (within reason). A firm believer in the dynamics of language, how language does things to and for people, and in the power of narrative for pro-creation and re-creation, and in the abilities of all language to multiply and replenish or to exploit and ravage, she is a constant explorer of The Possible. Her opinions are fluid, apt to change with the slightest revelatory experience or if, as she’s said elsewhere, magic words are uttered. She truly believes that she is always wrong and that the point of her life is to become less wrong—for her, a liberating concept. Currently, Patricia lives in Utah Valley with her husband Mark and three children.
1956-02-19
Petersburg, Virginia
MA in English from Brigham Young University
Author, poet
Female
Author
English