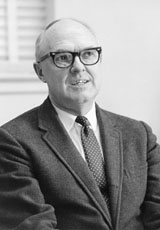 Anne Kendall Scowcroft
R. Mark Scowcroft of Washington, D.C.; Roger K. Scowcroft of Salt Lake City; and Philip H. Scowcroft of Middletown, Conn
1916
Ogden, Utah
Oct. 8, 2001
Bachelor\'s degree, University of Utah, 1937 Masters (1941) and PhD (1946), Harvard University
In 1947 he was appointed by Wallace Stegner to Stanford University where he was co-founder of the Stanford writing program and co-editor of the Stanford short stories. This program produced and published early work by the likes of Wendell Berry, Robert Stone, Larry McMurty, Ed McClanhan, Ken Kesey and many others. He would spend the remainder of his career at Stanford. Scowcroft helped develop the Creative Writing Program at Stanford, where he served as associate director and then director after his friend and colleague Wallace Stegner retired in 1971. Scowcroft also served as chair of the English Department from 1976 to 1978.
Author Wallace Stegner said that Scowcroft, \"besides being bright, animated, amusing and interested in everything that moved, he possessed social feelers of the most acute sensibility...He is a preeminently social animal, so genuinely interested in people that he becomes himself irresistibly attractive.\"
Author, Editor