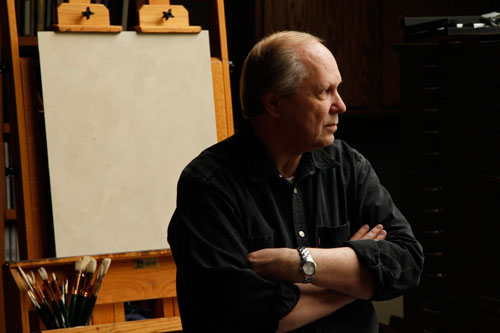 In addition to being an accomplished painter, muralist, and illustrator, Robert Barrett is also a professor in the Department of Visual Arts at Brigham Young University in Provo, Utah. He has exhibited his work in many art shows including those at the Society of Illustrators in New York, the Directors Guild of America, N.Y., and the National Arts Club, N. Y. His work has also been exhibited at the Annual Utah Illustrator’s Exhibitions, the Annual Springville Salons and exhibits at the Salt Lake Art Center.
LDS
LDS (Church of Jesus Christ of Latter-day Saints)
1949
Bachelor of Fine Arts in Painting from the University of Utah, 1973; Master of Arts and Master of Fine Arts in painting from the University of Iowa, 1975 and 1976.
His clientele includes Houghton Mifflin Hartcourt, Viking USA – with their imprints Puffin, Penguin, and Dial Books, Random House, McGraw Hill, Fawcett Books, Harper Collins, Clarion Books, Bantam, Double Day, Dell Publications, Thomas Nelson, Ideals Publishing, Concordia, and Deseret Book, as well as Outdoor Life, American History, Boy’s Life, American Legion, and McCalls Magazines. Robert has completed limited edition collectors’ plates for the Bradford Exchange in Chicago as well as limited edition prints for Millpond Press in Florida. His book “Life Drawing: How to Portray the Figure with Accuracy and Expression” was published in 2008 by North Light Books. He recently completed a children’s book on the life of President Obama entitled “Obama: Only in America” as well as a companion book on the life of Michelle Obama for Marshall Cavendish Publishers, New York.
He is a member of the Society of Illustrators, the Pastel Society of America, the Portrait Society of America, and the Salmagundi Club.
Male
Artist, Author, Illustrator
Robert studied painting in Europe as the recipient of a German Academic Exchange Grant and was an Artist in Residence at the Kimball Art Center as the recipient of a joint grant from The National Endowment for the Arts and the Utah Arts Council. He has received multiple awards for his work both locally and nationally. His work has been featured in International Artists Magazine, Southwest Art, Artist%u2019s Magazine, and American Artist magazines. He has also had work published in Society of Illustrator%u2019s Annuals, Communication Arts Magazine, and Print Magazine. In 1995 he was awarded the Karl G. Maeser Award for Teaching Excellence at BYU and in 2004 he was awarded the Karl G. Maeser Research and Creative Arts Award. He was recently selected as the 2010 %u201CDistinguished Educator in the Arts%u201D by the Society of Illustrator%u2019s in New York City.