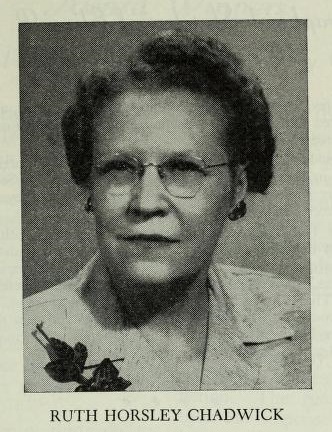 Ruth Horsley Chadwick was born November 5, 1900 in Brigham City, Utah. She was the daughter of Ernest Preston and Mary Alvira Mathias Horsley. She graduated from Box Elder High and studied at the University of Utah and the Utah Agricultural College, graduating from the latter with a teaching major in English. She taught at Logan High for a year before getting married to Le Roi Charles Chadwick.

Ruth was an active member of the League of Utah Writers, the Utah Poetry Society, and the National League of American Pen Women, which she was also Utah State president of. She was also a member of the LDS church and served on the Primary general board. She was a part of the editorial staff of The Children's Friend.