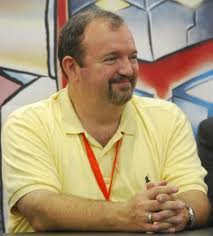 Tracy Hickman was born in Salt Lake City, Utah on November 26th, 1955. He graduated Provo High School in 1974 where his major interests were in Drama, music and Air Force JROTC. In 1975, Tracy began two years of service as a missionary for the Church of Jesus Christ of Latter Day Saints (the Mormons). His initial posting was for six months in Hawaii before his visa was approved and he moved on to his final calling in the nation of Indonesia. There, he served as a missionary in Surabaya, Djakarta and the mountain city of Bandung before being released honorably in 1977. As a result, Tracy can still speak conversational Indonesian and occasionally basis his magical phrases on that language. Tracy married his High School sweetheart, Laura Curtis, within four months of his returning to the United States. They have been married ever since and are the parents of four children. Tracy has worked as a supermarket stockboy, a movie projectionist, a theater manager, a glass worker, a television assistant director, and a drill press operator in a genealogy center. It was in 1981 -- between jobs and wanting to buy shoes for his children -- that he approached TSR about buying two of his modules . . . and ended up with a job instead. That job lead to his association with Margaret Weis and their first publication together: the Dragonlance Chronicles. Since that time in 1985, they have jointly authored over forty book titles. Tracy's first two solo novels, "Requiem of Stars" and "The Immortals" were published in the spring of 1996. More recently, Tracy and his wife Laura have been able to fulfill a long-time dream; they once again are writing together. Their first joint novel, MYSTIC WARRIOR, was published in 2004 and they look forward to a long and exciting career together. Tracy remains highly active in his church and pursues a number of hobbies including guitar, singing, piano, models, DVD and Bluray movies (although he STILL maintains that HD-DVD was a better format), computer games, television production and animation. He loves to read biographies, histories and popular science books. Tracy currently resides with his wife in South Jordan, Utah.
Dezra Despain
LDS
LDS (Church of Jesus Christ of Latter-day Saints)
Laura Curtis Hickman
1955-11-26
Salt Lake City, Utah
Hawaii (6 months as a visa waiter), Indonesia (1975-1977)
Brigham Young University
Author
Male
Author, Editor
English