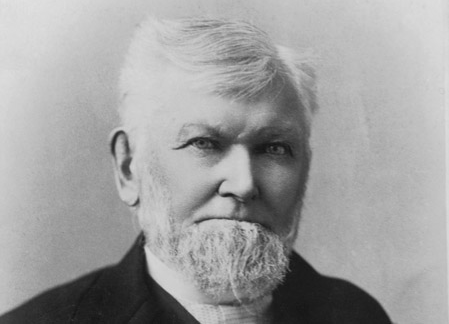 Wilford Woodruff (1807-1898), the fourth President of the Church, is especially remembered for his 1890 manifesto, which led to the discontinuance of plural marriage among the Latter-day Saints and to the assimilation of Utah into the political and economic mainstream of America. Prior to that event he led a strenuous life, notable for his remarkable success as a missionary and his diligence as one of the Church's premier diarists.
Elder Wilford Woodruff, President Wilford Woodruff, Elder Woodruff, Elder W. Woodruff
LDS
LDS (Church of Jesus Christ of Latter-day Saints)
He suffered broken bones in his arms and legs, split his foot with an ax, was bitten by a rabid dog, and was crushed and pinned by falling trees. He nearly lost his life from blood poisoning when he accidentally cut his arm while skinning an ox that had died of poison. He survived the wreck of a speeding train, nearly drowned, was frozen and scalded, and suffered several severe illnesses.
1807-03-01
Farmington, Connecticut
1898-09-02
Southern States Mission, Fox Islands, England, Eastern States Mission President
farmer, horticulturist, stockman, Utah territorial legislature, Provo City Council member
Male
Author
English